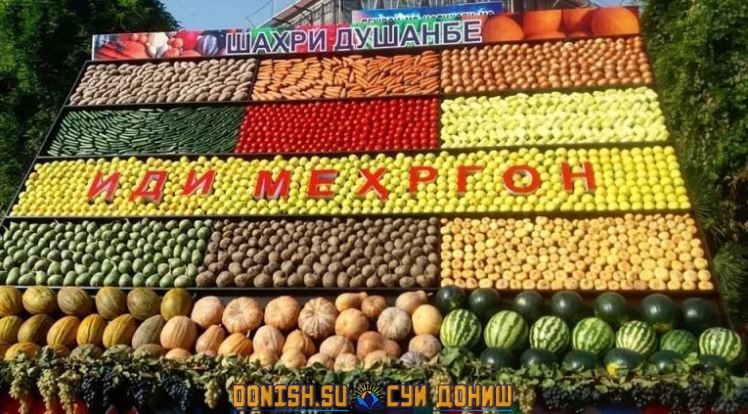 The state independence of Tajikistan has created a real basis for the revival of national traditions, including Mehrgon. By the Decree of the Government of the Republic of Tajikistan dated August 5, 2009, the Mehrgon holiday in the Republic is recognized as a national holiday and along with this, the Government of the Republic of Tajikistan constantly strives for a rich cultural heritage, traditions and customs of ancestors within the framework of state events.
It is the special attention of the Founder of Peace and National Unity, the Leader of the Nation, the President of the country, the respected Emomali Rahmon, to the glory and revival of national holidays, during the independence of the country, Mehrgon was revived with all its personalities and included among the best national holidays and is celebrated solemnly every year.
Currently, residents of cities and villages of Tajikistan celebrate great celebrations in honor of Mehrgon, in which the types of fruits, watermelons, melons, crabs and other salads are presented and dance on the street.
During the meeting, the sides noted with satisfaction the strengthening of bilateral cooperation between the countries and the expansion of mutually beneficial economic and trade cooperation.
It was also noted that in the cities and districts of the region there is a great potential and ample opportunities for processing vegetables and fruits, as well as packaging dried fruits. Mehrgon has been marked as Navruz since ancient times and among the peoples of Iran. If Navruz is the beginning of a new spring and the beginning of the vernal equinox in the Haral Tower, Mehrgon is the beginning of the second half of the year, an autumn dish and a holiday of farmers. Our great-grandfathers also celebrated it as a significant cheerful fruit festival.
Happy Navruz holiday, dear mothers. In both spring and autumn holidays, two dishes will be celebrated. Tajikistan's forest resources allow it to be considered as a nursery of trees for forest cultivation in all neighboring countries, including Iran and Afghanistan. In his speech, Mehrgon Farmer, as the head of Kishvarts, has a coherent position.
From this holiday, many signs in Central Asia, Afghanistan and Iran remained indicative of the development of agricultural culture and the existence of a social group of farmers. Back in the Old Testament, the Mehrgon festival was held in this ancient land. Culturologists found an image on one of the oldest night walls in an image belonging to the VI - VII centuries. Blonde hair with a scarf is tied on the forehead and planted on the surface. Cattle appeared behind him, from which the farmer releases it into a bag and puts it in it. Farmers with the fruit of the harvest, have fun playing under the voice of oppressive musical instruments.
There is a lot of information about the origin of the celebration of Mehrgon beginning from ancient sources. Mehrgon, according to the Zoroastrian calendar, took place in the 16th month of Mehr (equal to October 8th A.D.), in the middle of the autumn period after the harvest of the Dehkan Gulf. According to the Avestan livestock, each month consisted of thirty days, and each of them had a name in our days. As the sixteenth name of each month was Mehr, at the same time she increased the arrival of the day of Mehr and the month of "Mehr", and then removed the "gon" and created a large holiday of Mehrgon.
In the ancient era, the most popular and most interesting Russia of this holiday was artistic work, which was very magnificent. The meeting was attended by deputy chairmen of the region, heads of departments of the executive body of state power of the region and other regional structures, law enforcement agencies, chairmen of cities and districts, jamoats, settlements and other persons. During the celebration, melodies called "Mehrgoni", "Great Mehroniy", "little Medellin" and others were played in Mehrgon.
At the same time, he noted that in the cities and districts of the region there is a great potential and ample opportunities for processing vegetables and fruits, as well as packaging dried fruits. The celebration of Mehrgan for six days is celebrated in compliance with ancient traditions. On this day, they dress up new outfits, rejoice and have fun. Syrup, goulash, sweets, vegetables, pomegranates, apples, grapes and flower flowers are placed on top of the mehrgonia. Among the sources of the reservoir, reservoir, reservoir, Hissar district, as well as in the most fragrant water among the residents of Hissar district. Around Khan candles are burned and smoke is released in a Spanish jar. If a child is born on this day, he is given a letter in which the word "Mehr": joy, Mehrnoz, Mehrangez, Mehrbonu, Mehrvash, Mehrdukht, Mehrrob, Mehrbon Mehrrobi, Mehrrobi…
He also noted that in the cities and districts of the region there is a great potential and ample opportunities for processing vegetables and fruits, as well as packaging dried fruits. A special place in the culture and civilization of the Tajiks, people have preserved high spiritual values not only in their historical memory, but also, despite the pressure of their ancestors, for thousands of years they have widely celebrated their customs and rituals, depending on the requirements of the time.
Today, Mehrgon is a holiday of agrarians, a holiday of abundance and abundance of the farmer economy, prosperity and well-being of the cultural people of Tajikistan.