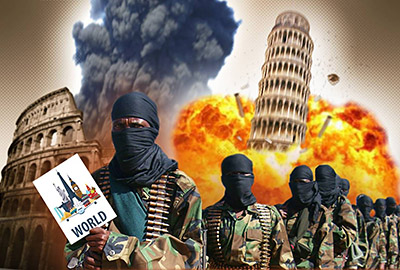 September 16-17, 1982, on the outskirts of Beirut. Lebanese-Palestinian Christians have launched a military operation at Palestinian refugee camps in Sabra and Shatila to find Palestinian militants, which has turned into a massacre of civilians. As a result, between 700 and 3,500 innocent people were killed in Sabra and Shatila, according to various estimates.

In 1991, Madras was killed by terrorists of the Tamil Eelam Tigers, the son of Indira Gandhi, the Prime Minister of India Rajiv Gandhi.

March 20, 1995, Tokyo. The bomber struck shortly after noon in front of a crowd of 5,000 at the Kasumigaseki and Nagatayo metro stations. 12 people were killed and 54 were poisoned. The terrorist act was carried out by the Aum Shinrikyo organization.

September 9, 1999, explosion and collapse of a nine-story apartment building on Guryanov Street in Moscow. 97 people were killed.

September 13, 1999, explosion in an eight-story apartment building №6 in the Kashira district of Moscow. 121 people were killed.

September 9, 2001, Khojabahovuddin town in the Takhar Province of Afghanistan. As a result of the terrorist operation, the commander of the armed forces of the Islamic Republic of Afghanistan and the "United Front" Ahmad Shah Masoud was killed.

On October 23, 2002, 1,000 spectators were taken hostage at the Dubrovka Theater Center in Moscow. 129 people were killed and more than 700 were injured in the attack.

September 1-3, 2004. At school No. 1 in the North Ossetian city of Beslan, terrorists took 1,100 students, their parents, and school staff hostage for three days. As a result, 350 people were killed, including the hostages and their rescuers.

October 18, 2007, Karachi, Pakistan. The bloodiest terrorist act in Pakistan's history has taken place. Former Prime Minister Benazir Bhutto, who had just returned from exile, was traveling in a car on a city street when two car bombs exploded. The death toll rose to 140 and more than 500 people were injured.

December 27, 2007, Rawalpindi. Benazir Bhutto, who attended a rally with her supporters, was subjected to a terrorist attack. The suicide bomber first fired at him and then detonated an explosive device. As a result, Benazir Bhutto and 20 others were killed.

November 14, 2015 in France. At the same time, seven attacks took place in the central districts of France, killing more than 140 people and injuring hundred.

On January 31, 2015, three explosions took place on Sayyid Zainab Street in Damascus. As a result, dozens of cars and shops caught fire. Houses near the operation were destroyed, killing 59 people and injuring 128 others.

On March 13, 2016, a terrorist act took place at a bus stop in the center of Istanbul, the capital of Turkey. At least 37 people were killed and 125 others were injured when a car bomb exploded at an Iraqi police recruiting center at Kisak, west of Baghdad.

March 22, 2016, Belgium. Two explosions at Brussels airport and one at a metro station killed 36 people and injured dozens.

On July 14, 2016, a terrorist attack took place in Nice. A 31-year-old Tunisian man drove a truck over pedestrians, killing 86 people and injuring 308 others.